Another week, another MARVELous (sorry for the pun…) episode of AGENTS OF S.H.I.E.L.D.

In ‘Eye Spy,’ Coulson and the gang track down one of his old proteges, Agent Mindy, long thought dead, more recently appearing as a turncoat with superpowers. Not only is she a skeleton from Coulson’s past, but she can see skeletons with her new gift of X-Ray vision.

Rather than going into detail surrounding the synopsis, in this ‘issue’ I simply want to cover the broad strokes/themes of the season and how they play out in this ‘Eye Spy.’

You are welcome to watch the episode for yourself, for free, on Hulu, if you have not seen it already.

WHO IS THE ENEMY?

Tough question, no answers. Last week, the culprit behind everything appeared to be Ian Quinn’s company and Dr. Franklin Hall (who we are still waiting to reappear as Graviton).

In the Pilot (first) episode, we had a shady organization attaching a Extremis style centipede on human subjects to create superhumans.

In the second episode, ‘0-8-4,’ it seemed the villain was simply Coulson’s old Peruvian contact whose government commissioned a weapon from Hydra decades ago. 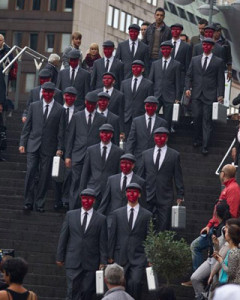 In ‘Eye Spy,’ all threads lead to another shady organization, this time inserting X-Ray-Vision/Bombs into people’s eye sockets, MISSION: IMPOSSIBLE III style (remember those bombs inserted in the nose by Philip Seymour Hoffman and friends?). Those with the implant receive X-Ray vision, but it comes at a cost; everything they see is watched by an invisible mastermind, controlling their every move with the threat of eye-ball detonation.

Is it the same spook group as those who played with Extremis Centipedes?  Or is it a completely different organization with it’s eye on S.H.I.E.L.D. (pun very much intended… again!).

Whether the case, they were after a mysterious equation, likely alien, which they were willing to pay $30 million for. Must be big. Maybe Thor big.

My hope is we are dealing with the modern day version of Hydra. Though seemingly destroyed in CAPTAIN AMERICA: THE FIRST AVENGER, in the comics, Hydra does continue on to modern day, always a thorn in the Avengers’ side. And Hydra does have a fascination with anything alien (the Cosmic Cube/Tesseract, anyone?), so said equation is surely up their alley.

What Is Up With Agent Phil Coulson?

As I’ve noted every week, something is suspicious with the resurrection of Phil Coulson. The story is, he is revived after being out for 40 seconds following his being impaled by Loki in MARVEL’S THE AVENGERS.

This episode, the clue was most obvious, with Agent Mindy, who had X-Ray Vision, asking what S.H.I.E.L.D. did to Coulson.

My money is still on Coulson being a version of The Vision, who goes with Ultron like America and Apple Pie. The next Avengers film is titled AVENGERS: AGE OF ULTRON, after all.

We are also reminded of Coulson’s love for old-school technology, which unless it pays off soon, is starting to get about as old as Bruce Willis complaining that he is supposed to be on vacation in each DIE HARD film.

‘Eye Spy’ is yet another fun AGENTS OF S.H.I.E.L.D. episode that leads us down a journey of further Marvel Cinematic Universe mystery.

One thought on “AGENTS OF S.H.I.E.L.D “Eye Spy” – More Skeletons In Coulson’s Closet”