I wrote an ‘article’ similar to this several days ago, but was too specific on which company I attacked, so this time, let’s just say I worked as a manager at ‘major theater chain.’

As further preface to this post, I must say I once prescribed to my favorite director, Steven Spielberg’s view on watching films; a film MUST be seen on the big screen. As Spielberg has said, he doesn’t direct movies for a home theater, iPad, or what-have-you. He directs all his films as if they will only be seen at your local movie theater.

Great idea! If you work at a movie theater and get free movies… or you are wealthy.

Movie prices are higher than ever. A regular, 2D screening of a film after 4pm on a weekday or anytime during the weekend (and holidays) at my closest theater is $10.50. That’s in Denver. When I lived in LA, it was closer to 13.50.

With such high prices, people began to wait for DVD, so Hollywood and NATO (The National Association of Theater Owners) decided they had to give the people something special. Something they could not get at home. So… they brought back 3D.

Though this isn’t your father’s, blue-eye red-eye 3D, I still insist it mostly remains as a gimmick that adds nothing to the movie theater experience (except maybe a headache). I’ve seen countless films in 3D (mainly IMAX 3D) and the only ones that were truly something to behold in the format were PROMETHEUS, OZ: THE GREAT & POWERFUL, and THE GREAT GATSBY.

I’m not one of those people who gets headaches due to 3D, but I eventually forget I am watching 3D. Not to mention, many films aren’t even shot in 3D, they are converted in post-production, which NEVER looks as good as a film actually filmed in 3D. Most films are post converted in a rush, from AVENGERS to 3D re-releases of JURASSIC PARK and THE WIZARD OF OZ.

Now, some people, still those I would consider fairly wealthy, have 3D TVs. NATO responds with their ‘Digital IMAX,’ a joke in itself as Digital IMAX is a fraction of the size of classic, 70mm film IMAX screens.

The average 2D Digital IMAX film in Denver costs $15.00. 3D Imax? More like $16.50.  In LA, I paid over $20 to see films like THOR and TOY STORY 3 in IMAX 3D. Don’t even get me started on AMC’s ETX or Regal’s RTX. I paid over $16 to see HANGOVER PART II in 2D ETX in LA without even knowing what I was paying for. it turns out, I was paying for louder speakers and a screen that wasn’t noticeably bigger than the average screen.

In the meantime, the DVD and Bluray markets collapsed, so now Studios are pushing Digital Download. I love having a ‘Cloud’ version of my movies, but only when it is included with the Bluray/DVD set.

In order to force Digital Downloads down our throats, movies like STAR TREK INTO DARKNESS and IRON MAN 3 came out nearly a month earlier on Ultraviolet, Amazon Instant Play, and iTunes. I should know, I bought them there in anticipation before buying them again on Bluray. I’m a sucka’!

A) It is too damn expensive to see movies at the theater. I want to see a handful of fall and winter movies, including AMERICAN HUSTLE, BAD GRANDPA, THE COUNSELOR, GRAVITY, PRISONERS, RUSH, THOR: THE DARK WORLD, ENDER’S GAME, MONUMENTS MEN, HOBBIT: DESOLATION OF SMAUG, ANCHORMAN 2, and JACK RYAN: SHADOW RECRUIT.

I will likely only see THOR and ANCHORMAN 2. I will not be seeing THOR on IMAX as I have the last 3 Marvel films, because I no longer get free movies (having left the ‘large theater chain’ I worked for).

Fine, movies cost a lot to see and snacks cost more. That’s nothing new.  Ticket prices and Gasoline are two things we can always count on to go up in price faster than inflation can match.

But, what really irks me…

B) Theater chains don’t give a shit at how they project the movies you paid a $100 to see (after snacks and bringing your family).

The company I worked for shows 2D and 3D movies on the same screen. Now, 3D projection requires an extra pair of lenses to produce the 3D image. This extra lense darkens the motion picture you are watching. 3D films are shot with this in mind… except PIRATES OF THE CARIBBEAN 4 (who the fuck remembers the title of that shit sandwich) which was a dark, murky mess. 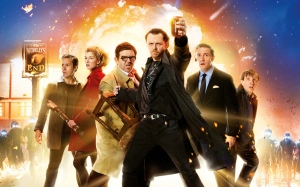 The company I worked for, and several others, have a policy of NOT lifting the extra lens for 2D movies. So, you are paying 10.50 or 13.50 to see a movie, projected far darker than intended by the director of photography (DP), director, and studio intended. Like WORLD’S END… you most likely saw that Edgar Wright instant classic darker than intended due to lazy companies and projector operators.

How long does it take to pull the lens up and away from the projection? Less than 10 seconds. As I said, the policy is not to touch the lenses, so you just paid a shit ton of money for 2 hours of a darker WORLD’S END.

The end result? Movies look better in your home theater set-up than at a theater chain. And you get to KEEP the movie forever for about the same price you could pay for one viewing.

Another quick fact, 3D killed the film projectors. Most theatres are completely digital, and I don’t care how great 4K looks, it will never be better than 35mm or 70mm film.

Sure, the experience of watching a movie with a crowd and reacting as a group is lost, but is that really worth $16? (The answer is ‘NO! FUCK NO!’)

Take this as propaganda if you want, but I consider myself one of the biggest movie fans in the world. I own thousands of Blurays and DVDs, and even went to film school and worked in Hollywood for 5 years. Then I worked at a theater for 3 years.

It just isn’t worth it.

As much as I love going to the movie theater, the price point is just too high to make seeing more than two or three movies a year a possibility.

So, a big FUCK YOU to all theater chains and movie studios!