It’s not often I review a film with a budget less than $100 million, let alone a film as inexpensive as The Sex Addict. Any self-respecting film fan knows there is no correlation between budget and quality. Transformers films are among the most expensive of Blockbusters, but they’re terrible. Clerks had a micro-budget and remains one of the best comedies ever made. Story, dialogue, and actors are king when it comes to a good movie, no matter the budget, as is the case with The Sex Addict.

Written, directed, and starring Amir Mo, The Sex Addict is a clever film that makes the most of its price-tag. Filmmakers like Mo who don’t have studio backing are smart to embrace comedy genre, more specifically mockumentaries. Making use of great comedians and their ability to crack wise on the fly, The Sex Addict is a great example of a independent film done right.

In fact, the film’s biggest strength is its actors. The movie does feature stars such as Horatio Sanz (SNL), Bryan Callen (MADtv, and Ken Davitian (Borat), but it really doesn’t need them. Most everyone else is perfectly capable of carrying the feature film without any sort of celebrity to their names.

Amir Mo is absolutely hilarious as Rex, the sex addict to which the title refers. He’s the heart and soul of the film. The man is a master ad-libber, as most the film is unscripted and plays out like a Christopher Guest picture. Rex is a clever, fast-talker who Mo successfully brings to life with his unique ability to be hilarious on the fly (it’s not as easy as it looks, folks). The lead of the film, Mo is in most scenes and interacts with nearly every other comedian, always with quick whit that feels natural rather than forced.  His is neither so add-libbed it is obvious, nor so scripted and wooden that it comes across as unnatural. His interview with Porn Star Mary Carey is absolutely hilarious and is where Amir Mo shines the most. He was born to be on The Daily Show with his sharp questions and even more clever responses to Carey’s answers. Rex is certainly a sexist character, without a doubt, but that’s the point, isn’t it? Rex is obviously a flawed character and the film addresses his short comings, not endorsing sexism even with the film’s subject matter.

Still, no one can do it alone and Mo was smart to surround himself with other talented actors that range from his co-stars all the way down to featured actors and extras. Valerie Tosi is great as Suzanna, a PhD student working on her dissertation in sex psychology who chooses Rex as the subject of her study. In an interesting twist on the Mockumentary genre, the Cameraman played by Sergio Crego is a character in the film as well, behind the camera nearly all the time, yet more involved and present than whoever is shooting “documentaries” like Mascots, The Office, or Arrested Development. I guess if he was a real cameraman, this would be frowned upon as he interacts with his subjects too much, but in The Sex Addict it is a refreshing addition to the genre.

Looking past the two main leads, Caleb Thomas as Theodore is unbelievably funny, second only Rex. Anyi Malik as Arnell is another scene stealer; I would watch a movie just about him and Theodore (though Rex would need to have a presence as well). Danielle Gross also drives home the humor as Rex’s not-really-but-sort-of platonic friend Trudy. Even very minor characters like the two women Rex meets at a Church are incredibly talented. There are points in the film where I wasn’t sure if I was watching actors or real people caught in Amir’s cross-hairs because the acting was so seamless. The aforementioned women Rex meets in the church are a great example of this. In the church, I thought they were just disgusted, real people that Mo was messing with in character, but when they showed up in the next scene, I realized I misread the situation. Their shock and disgust was just that convincing.

Look, I interned at a company where all I did was watch movies submitted by idiots who really did think they were the next big thing. And every, single one of those movies was terrible… nay… unwatchable. The Sex Addict wouldn’t have been one of those films. It would have been a bright spot in a bleak internship. It is a truly is a funny film with a great premise and solid execution. It’s one of the good ones.

The Sex Addict is available to preorder on DVD, Bluray, and Digital on March 28th, on iTunes and Amazon! The film itself is out April 28th. So check it out!

Normally, we focus on the big picture here; the most mainstream of the mainstream. Yet, for every gigantic Marvel film and far less successful movies that still sport A-List movie stars, there are also thousands of films made for a fraction of the price by aspiring filmmakers. While most of these films will slip by, unknown, some will be the next Clerks. There are a lot of “kids” who think all they need to do is max out credit cards or use Daddy’s money to become the next Kevin Smith. And then there are the truly talented up and comers, who are making some pretty great independent films.

It is incredibly important to keep your eyes open for the films you won’t see advertised all over the web, TV, etc. There are films out there that will be the next Evil Dead, Clerks, Paranormal Activity, etc. You just don’t know it yet. Even if no one you know has heard of it, you may find an independent gem that will become one of your favorite films.  Likewise, keeping your fingers on the “independent pulse” will make you aware of new talented writers, directors and actors that may make or star in your favorite TV Show or Blockbuster one day. Directors like Steven Spielberg and Christoper Nolan, as well as the actors crushing it in Marvel films may be our present, but independent films are indications of the film landscape in the not-so-distant future.

The Sex Addict is one such film I’m keeping my eye on for said reasons. Amir Mo strikes me as someone we will all someday know in the comedy scene, based on this hilarious trailer for a movie he wrote, directed, and stars in. With this film’s partially add-libbed, mockumentary style, I could see Mo becoming the next Christopher Guest or Larry David. One day you’ll see him in a sitcom, a comedy hit, or even as the next auteur behind a film in your favorite franchise

Or you don’t need to dwell on the future of Amir Mo; his current film, The Sex Addict, just might be your next favorite comedy. If you don’t seek out films like this, you will miss out! So, when you see this film and love it, you’re welcome. When you eventually see Mo in the big leagues and think to yourself, “I’ve been enjoying his work before he was famous, I’m the best, this is awesome!” you’re also welcome.  If you must have celebrities, The Sex Addict features Horatio Sans (SNL), Bryan Callen (MadTV, Oz, The Hangover 1 & 2), and Ken Davitian (Borat), so what’s your excuse?  Open your eyes to similar films outside the mainstream, and check out the trailer for the hilarious independent film, The Sex Addict.

A sex-addicted man’s life starts to unravel when he becomes the subject of a school documentary by a bookish yet beautiful young PhD student. This comedy mockumentary examines the life of Rex, whose addiction to the many vices of sexual pleasure have left him at his witless end. 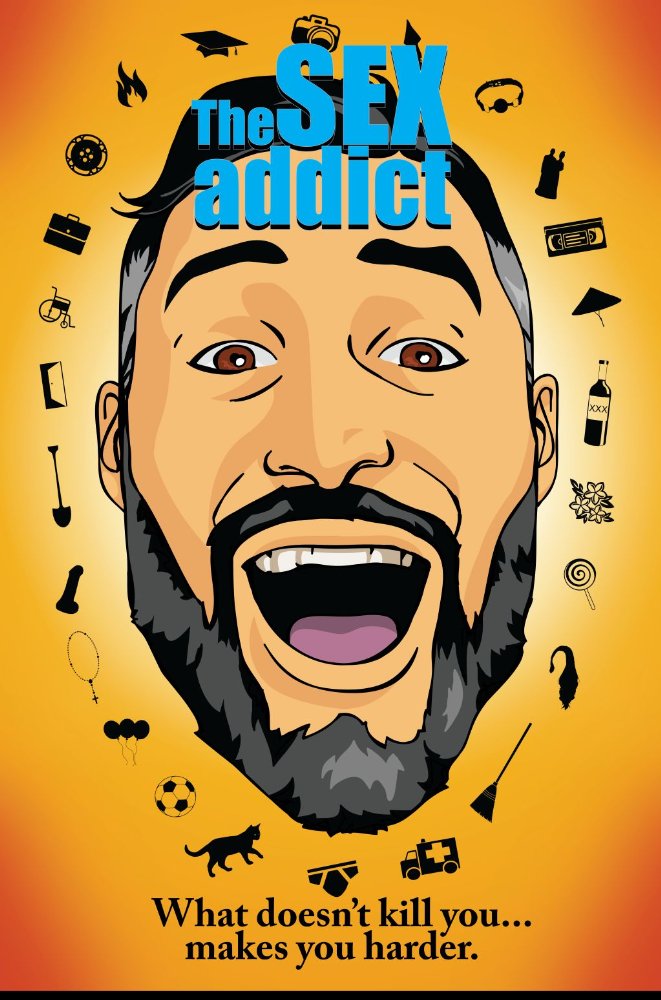