We did it! We survived one of the highest grossing summers on record due mostly to Universal Studios hits like Jurassic World, Minions, and Straight Outta Compton. Not that Disney doesn’t deserve credit for Avengers: Age of Ultron, Inside Out, and Ant-Man.

But this list isn’t about the money grossed, it’s about the quality of films we watched. What were the 6 best films of Summer 2015? According to me…

Let’s start with my predictions for the whole year. View that article in its entirety or just read this list of my anticipation levels from least excited to complete obsession. Again, there were my predictions based more on enjoyment level, not a list predicting which films would necessarily be best this summer.

Since this new List only covers Summer 2015 and not the Fall, we can knock Star Wars and SPECTRE off my possibility of choices.

The original list are the titles I thought would be most enjoyable. To be transparent, this new list of the “Best” Movies of Summer 2015 takes into account enjoyably AND quality. If this list were purely based on how much I enjoyed a film, the list would look slightly different.

Let’s start work from sixth favorite to my number one; this post just containing Sixth through Third favorite.

WARNING: SPOILERS Follow for each Film. Skip one if you haven’t seen it and don’t want it spoiled. 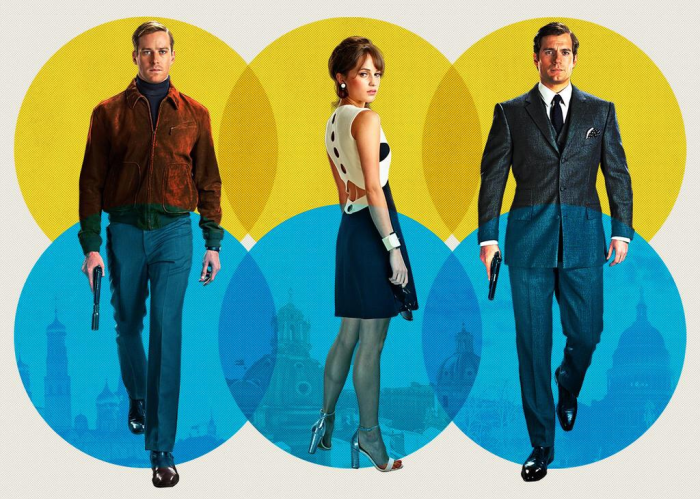 Not a great Guy Ritchie, nor Spy Film, but I had to include it rather because it still deserves a spot on this list, even if it was my 6th favorite movie of the summer and most lists are traditionally out of five.

The Man From U.N.C.L.E film is classy as hell, with tons of Guy Ritchie style more apparent than his more tightly controlled bigger studio franchise, Sherlock Holmes. The “buddy” dynamic between US Agent Solo (Our current Superman,Henry Cavill) and USSR Agent Illya (Armie Hammer!) brings most the humor that is not limited to dialog exchanges, but also humorous action scenes involving the competitive nature or two Spies from different sides of the Cold War.

HIGHLIGHTS: Henry Cavill  continues to nail the role as an American (again, see Man of Steel) with all the added almost overabundance of charm required to be a fantastic play on Sean Connery’s or Roger Moore’s version of James Bond.

Likewise, though they have a Brit playing an American and Armie Hammer playing Russian, Hammer also nails the role, with his aforementioned antics with Cavill’s Solo providing most of the film’s enjoyment.

Just like Kingsman back in February, Man From U.N.C.L.E. also has great classic 60’s 007 references in its locations and over-the-top not-so-secret Spy work of suave Solo.

WEAKNESSES: The action just isn’t there compared to other 2015 spy films like Kingsman: The Secret Service and Mission: Impossible – Rogue Nation. There’s a decent chase at the end, some fun silly action sequences like the opening car chase, but the action just isn’t as abundant as in a 007 picture, for example.

Likewise, the “turncoat” scene where Gaby (Alicia Vikander) gives up Solo and Illya only to be reveled as a questionable British Agent, is very reminiscent of Mission: Impossible – Rogue Nation.

The film really feels like a set-up for a wonderful franchise we will never see as The Man From U.N.C.L.E. was a flop.

Look, Ant-Man is neither my favorite Marvel movie, nor my least favorite. In an age when Ant-Man is Marvel’s 12th(?… Maybe 11th) movie, that is not a bad thing what-so-ever.

For me, Ant-Man falls in the middle of the pack, higher than The Incredible Hulk, both Thor movies, Iron Man 2, and Captain America: The First Avenger, but lower than movies Iron Man 1 & 3, Captain America: Winter Solider, Guardians of the Galaxy, and both Avengers films.

Highlights:   The cast, to start! Paul Rudd as Scott Lang gives us our most grounded Avenger yet; a father who is kept from his daughter because of a criminal past. Marvel as a Universe is known for down-to-Earth heroes, but Iron Man, Thor, The Hulk, and Capt. are not mortals like Ant-Man (Iron Man technically is mortal, but he has none of the angst that comes with fatherhood). Rudd is one of the most likable Avengers, with his character’s weaknesses yet strength of charm, empathy and comedy.

Stoll combines the classic elements of Norman Osborne’s madness in the original Spider-Man and Obadiah Stane’s suit-envy in Iron Man. Meanwhile, hilarious Michael Pena brings more humor to the film than even funny-man Paul Rudd, reminding me of his favorite role as Seth Rogen’s right-hand security guard in Observe and Report.

Which brings me to Ant-Man‘s next strength… the genre. Lately, Marvel movies have played with mixing different genres with the classic Super Hero story to give their origin stories and the like more originality. Winter Soldier was a 70’s Thriller, Guardians was a Star Wars-esque Space Opera, and Ant-Man is a heist film… complete with a full team… including Michael Pena! (BOOM! Brought it all the way ’round.)

Yet, the tie-ins to Age of Ultron and Captain America: Civil War are the movies greatest strengths. Nothing like Ant-Man fighting Falcon (Anthony Mackie) and the mention of someone who “can climb walls.”

Humor is the final piece of Ant-Man‘s successful puzzle. My father had no interest in Ant-Man, but I dragged him along and he was shocked by how funny the film is! Like The Guardians of the Galaxy, humor was the only way to make Ant-Man mainstream.

Weaknesses:  Some of Ant-Man is very cookie-cutter Marvel. Sometimes it does feel too much like the 1st Iron Man from the idea of a “suit” as his superpower to the notion that the villain just wants the same tech. In it’s least interesting moments, Ant-Man can feel like an Iron Man clone.

It’s The Avengers Assembled! Again! This time fighting a creation of almost villainous Tony Stark (who does risk the team’s life with the best intentions), Ultron, an artificial intelligence who cannot be destroyed until he is locked out of the net and every drone is blown to bits.

Highlights: A lot of people love to hate this film, but I still think Avengers: Age of Ultron is Marvel Top Five; even better than the 1st film.

Why? Because The Avengers was mainly awesome because of the “Holy Shit! Bruce Banner just met Steve Rogers!” That single shot in the 1st film that flies around New York City, catching every Avenger in action was mind-blowing.

And this film opens with a scene just like that!

Age of Ultron is the stronger film as the plot is more important and fleshed out than the 1st Avengers. Think about it; the 1st film was mainly on the Helicarrier and dealt with simply following Loki around, knowing exactly what he was up to. Age of Ultron doesn’t just offer a more fluid and varied plot crafted for amazing action sequences, but a more personal story that brings out every Avenger’s (except Hawkeye) greatest fears.

Tony Stark’s scene of fear is the most poignant; an alien invasion heading toward Earth while his friends die a rocky-planet with Capt. accusing Stark of not being there to save them. This is an excellent plot device to drive Stark into horrible decisions… like creating artificial intelligence using Loki’s staff… which was also handled by Hydra. It also sets the stage for Avengers: Infinity War where our heroes could very well end up dead on an Alien planet after a failed defense against Thanos.

Finally, we get a lot of Captain America! he has most the screen-time and why not? He’s team leader and his fight with Ultron is Seoul may be a mismatch, but it’s Capt. at his best!

Weaknesses: I may like Age of Ultron better than Ant-Man, but it sure has more faults.

Too many characters! You can’t just add three Avengers in the 3rd Act (even though we knew you would…)! One can only hope that the super talented Russo Brothers can balance the sheer amount of Avengers that will exist by the time Avengers: Infinity War comes out.

Ultron is not as cool as he could have been. Right James Spader?

Hawkeye needs some screen-time to make up for The Avengers, and it’s awesome he actually has a family (like Scott Lang), but too much time spent on his farm regardless.

That’s it for Today, folks.