I’ve proven, without a doubt, Geek and Nerd can be used interchangeably. Now I am free to move with my list of The 5 Most Accurate Geeks in Film and Television! Any Hollywood Writer and Studio Exec can create Geek characters for the masses to enjoy, but those of us who are truly Geeks will notice the difference between characters that feel authentic and those who are simply insulting stereotypes. (Clue: all the characters on the following list were created by Geeks… for Geeks).

The intention of this post is to celebrate the authentic fictional geeks, so rather than list a all the bad stereotypes, I’d just like to point to just one TV Show with poorly crafted Geeks. The Big Bang Theory is one of the most watched comedies on Television, but because of this, it delivers watered down Nerds without any truth behind them. These “Geeks” may be almost impossibly smart, love science, go to the comic shop, and talk in what sounds like so “Gibberish,” but they’re simple stereotypes meant to deliver giant numbers for America’s most watched Network, in a show produced by NOT uber-Geek, Chuck Lorre. They’re just fit the preconceived of what regular folk think Geeks are like.

With all sorts of movies and TV shows centering around geeks, aimed at smaller, more specific audiences in the age of a thousand cable and internet channels to watch, we’re getting more characters every year that feel authentic, even to the Nerdiest of Geeks.

Tim Bisley is the Geek on this list most likely survive in normal society and least likely to stick out like a sore thumb. Spaced was co-created in 1999 by Simon Pegg, who also played one of the two most central protagonists: Tim Bisley. This character was created at the beginning of Geekdom’s rise to mainstream; the year Star Wars returned and two years before Spider-Man became the first Comic Book Movie to set Box Office records in over a decade.

Today, Tim would be your most basic form of mainstream Geek; he wants to be an illustrator, smokes weed and gets philosophical about Star Wars, wears T-Shirts with geeky references, loves Zombies, worked at a Comic Book Shop, and had a very special theory about Star Trek:

…Sure as day follows night, sure as eggs is eggs, sure as every odd-numbered Star Trek movie is shit.

17 years later, Tim still feels very authentic to my own personal experiences in 2016.

Created by the King of the Geeks, Kevin Smith, Brodie (not the only lead in Mallrats named after a Jaws character) is based off Smith’s friend Walter Flanagan, with whom Smith would search for Comics all across New Jersey.

Brodie, like Tim, isn’t so socially awkward that he can’t act mostly normal in public. Instead, his Geekiest qualities come from his interests and devotion to them. Tell me you haven’t seen a larger comic book collection (on screen or otherwise) as his Mother’s basement full of long boxes. Between the events of Mallrats and Jay and Silent Bob Strike Back, Brodie even opened his own comic shop! Putting Sega Genesis over his girlfriend, spending his free time in Malls and Flea Markets, discussing superhero antimony with Stan Lee, Brodie is a geek that comes from a very real place. He’s just attractive and outgoing enough to have a girlfriend that is out of his league. But that doesn’t mean he isn’t a geek! 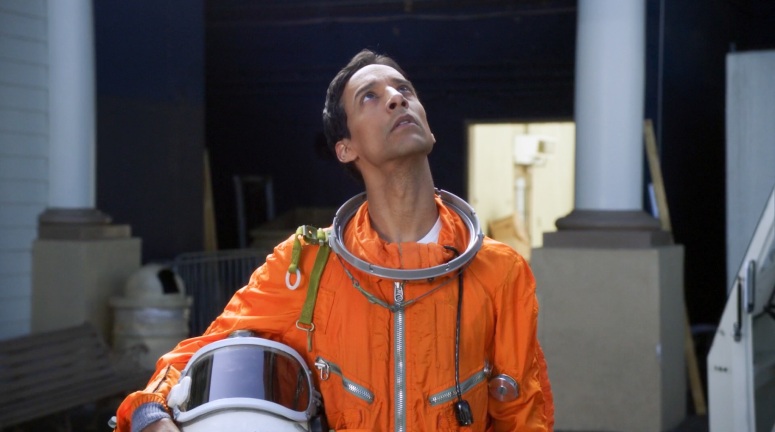 These last 3 “Top Geeks” on my list are socially awkward to a point of not being able to fit in, but that does not make them stereotypes.

Abed from Community is a film geek to the most extreme degree. Who’s to say if it’s his Autism or simple movie obsession and lack of caring what his “normal” peers think of him that make Abed so “weird?” I relate to Abed more than any other character on this list. He soaks up movie knowledge and quotes it faster than a Kevin Smith character while also digging deeper into its philosophy than Tim. The only time Abed seems normal is when he’s pretending to be someone else (like Han Solo), something I think a lot of fellow Geeks can liken to acting not being yourself in public.

Abed isn’t just into stereotypical Geek Culture like Inspector Spacetime (a play on Dr. Who), he also loves Cougar Town!  And he doesn’t fall under the archetype as super-smart Nerd; his intelligence lies in pop culture subjects like determining who’s the boss on Who’s The Boss?

The last two come as a pair! Moss, Roy, and the TV show on which they appear, like all the good Geeks & media on this list, are not only created by Geeks, they are tailor made for this smaller “society,” not the millions watching CBS. Their content is better enjoyed if you are familiar with what the references and understand some of their struggles. In The IT Crowd we see the dynamic of a “bromance” between two Geeks that is just as threatening to their social status as their other characteristics. I have a friend with whom I discuss comics so in depth that anyone trying to follow is at a loss; that’s Moss and Roy in a nutshell. Two incredibly “weird” heteosexual life-partners.

Both work in the IT Department, making them the two smartest nerds on this list, in a very Geeky area of expertise. Roy is closer to Tim or Brodie than Abed. Though he is a little stranger than Tim or Brodie, he can still manage the attractive girlfriend… until they learn too much about him. Similar to Abed, Roy has an inability to understand social situations, but instead of complete awkwardness this makes him seem uncaring and vain. That’s another type of Geek I’m familiar with and can relate to! And, of course,he has a new reference on his T-Shirt every episode.

Moss is more of the poindexter of the group, smarter than Roy with computers and the like, but just as socially inept as Abed. Moss is the only one on the list without a T-Shirt, preferring the classic Nerd-style of a button-up shirt and tie with giant black glasses and an Egon-esque haircut. Like Abed, he’s the extreme case of being so “out of it” that he lives in his own Geektacular World, and will likely never fit in and have a “normal” life. He’s hopelessly Moss.

The entertainment world is not limited to these 5 accurate portrayals of Geeks. These days, there are authentic Geeks anywhere you look… except CBS.