I’m tired of giving DC movies poor reviews, I really am. I’m not a Marvel Fanboy, I believe in both teams. It is true I have more favorite Marvel characters than DC and like Marvel Studios’ movies better, but I have read far more DC books; all the essential Batman graphic novels (Year One, Dark Knight Returns & sequels & prequel, Long Halloween‘s family of books, The Killing Joke, Arkham Asylum, Knightfall, Prey, Hush, Mirror’s Edge, and even No Man’s Land), every issue of Batman, Detective Comics, Hellblazer/Constantine, and Supergirl, New 52 to the present,  as well as a good number of Suicide Squad, Justice League, and Batman & Superman New 52 story-lines. I also love older DC movies and TV including Batman: The Animated Series, Batman (1987), the animated films like Year One, and especially the Dark Knight trilogy and all four of Arkham video-games.

Yet, in 2016, I keep having to knock DC for blown opportunities like Batman V Superman: Dawn of Justice, Batman: The Killing Joke, and now Suicide Squad. I love these characters and their world, I really do. In fact, I’ve come to the conclusion that rather than Marvel and Fox forming an alliance to bring X-Men into the MCU, DC should hand off their characters to Marvel Studios so they can make amazing films using these iconic characters. They can keep the universes separate, but for God’s Sake, give these movies to someone who knows how to make a good movie, because at the moment DC Entertainment, as well as their writers and directors, are incapable of it (except for the shows… I hear they’re pretty, pretty, pretty good and I still miss Constantine).

Going forward, I will clearly announce any SPOILERS, and most will be vague. What I absolutely won’t do is spoil Suicide Sqaud‘s antagonist’s identity, because (most) the trailers have been good at keeping it hush-hush (no, the bad guy is not Batman villain, Hush, I will say that).

I’ll also break this Review into Parts for easy navigation, because this will be a very long one.

Suicide Squad reminds me most of the so-so (here I go using that descriptor again…) first X-Men movie from the year 2000, before the modern age of truly good Superhero movies cemented by Marvel Studios 6 years later. This movie a muddled, bleak, grey world inhabited by underdeveloped characters that are mere shadows of their comic counterparts,  with unexplained plot points and character motivations, as well as completely “blah” action scenes. Forget the pop-y,bright visuals and tone of the many trailers and prepare for a movie less appealing visually than Batman V Superman. 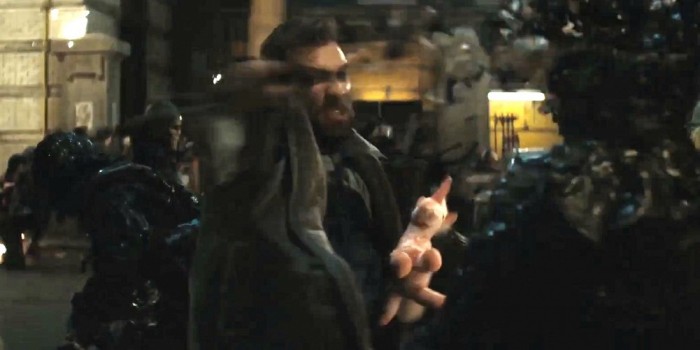 What humor? You mean the “jokes” you’ve already seen in the trailer? Because other than that, the biggest joke is that Captain Boomerang (Jai Courtney) has a Unicorn fetish, which may have been funny… before we saw Ryan Reynolds jerk off to a plush Unicorn in Deadpool back in February. Sure, this film was shot before Deadpool‘s release, but being 2nd to the Unicorn Orgy looses all the thunder. At least Will Smith as Deadshot is funny enough through attitude alone; Smith hasn’t been this snappy since his 90’s classics like Independence Day and Men In Black. Everything else is bleak as Batman V Superman. Suicide Squad seems like it wants to be more like Guardians of the Galaxy and Deadpool, but it fails, miserably.

None of these fantastic characters are done justice. The film is overstuffed with characters. You can do Suicide Squad with less… Katana and Enchantress are more often associated with Justice League Dark’s “Magic” corner of the DC Universe (this should have been a Justice League Dark movie…), Diablo and Slipknot are nearly complete unknowns, and Killer Croc has never been a Task Force X member until now. Focusing on essential characters Waller, Quinn, Deadshot, Rick Flag, and even Captain Boomerang would have been ideal. Guardians of The Galaxy proved you can flesh out a party of characters without Avengers-esque origin films preceding them, but Squad feels lost in characters like X-Men: Apocalypse (which is NOT a flattering comparison).

Part of this is actually Will Smith’s fault (or WB, depending how you look it).  Because they cast such a giant actor to play Deadshot, who rides 2nd fiddle to Harley Quinn and Rick Flag in the comics, he now becomes the focus of the movie and steals screen time from other characters who are more important in the source material. But wouldn’t you do the same if you had Will Smith in your movie?

This Amanda Waller is a perfect adaptation of her comic counterpart, perhaps one of the most faithful Comic Book to live-action interpretations ever. Will Smith brings snarky-ness to Deadshot, though his motivation to see and care for his daughter seems half-baked and one-note (especially compared to Scott Lang in Ant-Man). It feels like Harley Quinn just exists to justify Joker being in the movie, and her arc with Deadshot transitioning from a “Bad Guy”to someone with enough empathy to save the world is not earned at all; feels forced. Diablo is given some interesting motivation too, but again, it’s one-note with no depth. Every character seems to want one thing and one thing only, without any growth. Meanwhile the rest barely exist. Katana’s origin is delivered in a quick sentence right before the final climatic battle!

Though his appearance is brief, Ben Affleck’s Batman may be even better in Suicide Squad than in BvS! He moves differently, even more gracefully than than BvS, and seeing him from Deadshot’s POV is damn intimidating. Bruce Wayne even has a bit to do, in one of my favorite scenes in the movie.

On the other side of the coin, Jared Leto’s Joker is simply a mess. A mess AND a complete miss, as if writer/director David Ayer hasn’t read a Batman comic since “The Golden Age.” This latest Joker is simply a mob-boss who is a little crazy; not Joker crazy, but more like TV’s Dexter crazy.

Slight SPOILERS: Joker only kills other gangsters and people directly in his way of rescuing Harley, without any of the collateral damage or joyous mayhem the character is known for. His voice is a Heath Ledger knock-off and his laugh is creepy, but continues to miss the fun Mark Hamill brought to the animated version in the 90’s. And his motivations are very questionable to a comic fan such as myself. All Joker wants to do is rescue Harley Quinn. Though he breaks her out of Arkham all the time in the comics, he’s always willing to throw her at Batman to escape (which he sort of does here) and often abuses and mistreats her. Her love is often one-sided, but this Joker seems to care about her more than Mayhem… or getting Batman. SPOILERS OVER!

The characters that are actually deemed necessary are given flashbacks, which, though quick and also underdeveloped, are the best part of the movie. The movie starts strong with these quick stories explaining their origins (sort of), which also happen to be the only visually appealing sequences of the film. There are too many though, and while the 1st act is the most enjoyable, it does feel like an extended trailer. Some flashbacks are saved for later in the film, which really, really, slows down the story and feel completely unwelcome. So, it’s all downhill from the 1st act.

Just a mess. All the pop-y fun of the 1st act is drained away in favor of poorly choreographed action sequences against the most generic soldiers since Loki’s Chitauri army in The Avengers or Ronan’s “Ninja Turtle” aliens in Guardians. Task Force X’s mission also seems misguided and a little unclear. Like I said earlier, Suicide Squad feels like a Superhero movie from the early 2000’s before Nolan and Marvel Studios figured out how to elevate the genre.

As I mentioned, the “zombie soldiers” Task Force X faces are another example of giving a superhero team an army to destroy without murdering tons of human beings (though these “monsters” were once human, but Flag assures us they aren’t anymore…). The Avengers had the Chitauri army and Avengers: Age of Ultron had a robot drone army.  This feels similar, with a less interesting design and no charismatic leader like Loki (Tom Hiddleson) or Ultron (James Spader) to taunt the “worst heroes ever.” These soldiers are literally black blobs, a metaphor for all the bland visuals and fight scenes showcased here.

Just like with X-Men: Apocalypse, we’re back to a super-villain set on destroying the entire planet, doing just as much damage to Midway City as  Zod and Superman did to Metropolis (with a lower body count, as many were evacuated… I guess). In an era where we are transitioning to villains like Heath Ledger’s Joker who want to destroy the hero, not the world, including movies like Iron Man 3 and Captain America: Civil War, it’s just another goddamn destroy the entire world plot. Not awesome. Or original.

The finale shares so much in common with the end of the original Ghostbusters (1984) to a point that there is no way these similarities are coincidence. The villain is magical, reads the team’s thoughts, and is even uncased after the fight, like when the Ghostbusters pull Sigourney Weaver out of the husk of melted “dog.” Worst of all, it totally has that slow motion monument where (most) the team all does their part to destroy the villain; more akin to the cheesy versions in the original Fantastic Four (2005), X-Men: Apocalypse, and Batman V Superman than that awesome team fighting shot in The Avengers.

Is it really rockin’? Full of great songs, Suicide Squad tries hardest to be Guardians of the Galaxy with its Soundtrack. I’m sure it does make for a great Soundtrack, but in the movie this overload of music seems distracting and overbearing; every time we meet a new character (every 3 minutes or so) we get a new song. Sloppy and simply thrown together like the rest of Suicide Squad. 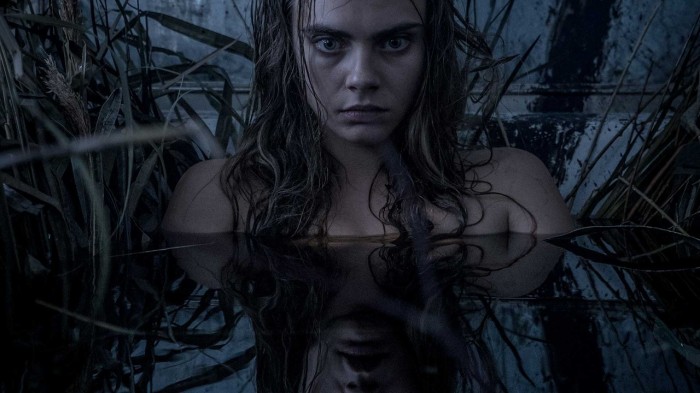 Another giant missed opportunity by DC. Suicide Squad tries hard to replicate the success of team-up movies like X-Men, Guardians of the Galaxy, and even The Avengers, but in doing so feels like a paint-by-the-numbers formulaic team movie, bringing nothing new to the table. The movie doesn’t even commit to its one chance at being unique; the twist that they are the villains, not our traditional heroes.

I can’t determine if I like the movie more or less than most because I know the comics. After all, I notice all the incorrect characterizations like the Joker’s motivation, the team dynamics, and the odd choice of including characters like Katana and Killer Croc (who is more impossible to understand than Bane, by the way). But, like BvS, there is a lot of set-up for future films and Easter Eggs that comic fans recognize, but will confuse and alienate the average movie-goer (SPOILER – like the Flash’s cameo… most may say, who is that? Especially with the new costume. – END SPOILER). I guess it some strange combo of both for me, disappointing on nearly every level.

Get your shit together, DC! If Wonder Woman and Justice League aren’t dramatic improvements, your Extended Universe may be dead in the water. I love the characters and the comics, I’m just saying it like it is.