NO Spoilers past the 1st Act here! Safe for all to read!

Not that the style doesn’t work in small doses. The trailer was incredibly effective, for a moment convincing me that an entirely 1st Person Movie could be consistently entertaining (I think Queen deserves half the credit for for selling the song rights to “Don’t Stop Me Now”). I’ve never seen Doom starring Dwayne “The Rock” Johnson, but surprisingly it was last month’s The Brothers Grimsby that delivered several 1st Person Action Sequences that really worked!… and were better than any in Hardcore Henry.

The 1st time I saw the trailer for Hardcore Henry, I was at first disgusted by the proposed “gimmick” of watching a movie as one would watch his friend play Call of Duty, but was slowly won over by cool action twists and the aforementioned rocking Queen song. It’s a shame all the top action moments are in that trailer.

Hardcore Henry is truly one of those movies that works better as a three minute trailer than a feature film. The problem isn’t solely the style; Hardcore Henry shares all the weaknesses of a forgettable 1st Person Video Game Shooter. More underdeveloped/flat/wooden characters than the Star Wars prequels! More generic looking bad henchmen than were slaughtered in Deadpool.  And though the plot is surprisingly even more nonexistent than a bad video game, it is also as confounding as that of Batman V Superman. The entire time you think, “What the Fuck is going on?”

Again, rest assured, what follows is all established in the 1st Act of the film, so Nothing here is a Spoiler.

The lead villain, Akan (Danila Kozlovsky), has telekinesis powers (and seems to be Albino… or another brother from Hans Gruber’s blond henchman family in Die Hard), for no reason other than to provide an epic “Final Boss” battle: video game style. A prequel comic titled “Hardcore Akan” exists, giving an origin to the character… at least explaining how has such powers… if you can get your hands on it (and the average viewer won’t… which should leave them fairly confused).

Even the prequel comic doesn’t explain Akan’s plot to create an army of Super Soldiers, something we’ve only seen repeated by villainous organizations such as the Weapon X Program from the X-Men films, (nearly) any company in the Marvel Cinematic Universe (but usually Hydra), and Kevin Spacey’s Atlas from Call of Duty: Advanced Warfare. So, you know, he wants what every modern villain wants. And though many films fail at this (including Batman V Superman), there is nothing human about the villain. No character depth present. Not the strong type of villain who doesn’t see himself as a bad guy. Akan really is just a bad guy for the sake of being a bad guy. Jerkface.

On the opposite side of the spectrum, the equally unmotivated/flat character Jimmy, played by the always scene stealing Sharlto Copley (District 9, Elysium, The A-Team), is actually quite enjoyable… and his very existence creates a fun mystery for the audience to figure out. 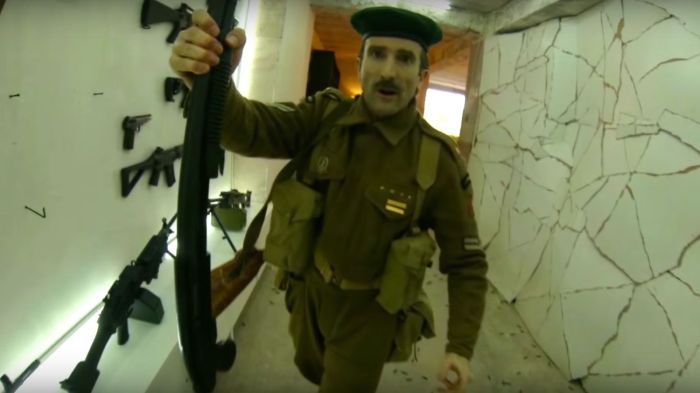 We first see Jimmy first as you see him in the trailer… and he quickly dies (again, NOT a Spoiler). Then he reappears with a new accent and look, remembering Henry and keeping the same name: Jimmy. Don’t worry, it all gets explained and it is a pretty cool idea which makes for the most interesting action scene, though one great actor and his “twist” can’t save the entire movie. It does give Copley some real fun scenes to do, making his screen presence the highlight of the film.

I did have the chance to see a Q&A before the film where it was made clear that Director Ilya Naishuller idea’s of doing a 1st person film wasn’t to just make the movie look like a video game, but to put you, the viewer, in Henry’s shoes. Jimmy and Akan address you directly… but it still doesn’t work. Instead, having a blank slate of a main character backfires; you have no empathy for a character without a voice or even a face to emote. I didn’t feel like I was Henry, even more so because there aren’t even buttons to hit at the right moment to perform an action like the most basic of video game cut-scenes.

Does the movie work at times? Hell, yeah, brah! There are some really cool action bits, but, alas, they are all in the trailer (that old chestnut). Shootouts and chase scenes do work in this style, but hand to hand combat is a complete mess that will make you sicker than a “Found Footage” film or shaky-cam Bourne style film. Thank God Hardcore Henry is not offered in 3D! You loose all sense of place when the camera is going everywhere because “Henry” is being thrown around.

And, of course, there is ultra-violence for violence sake. Intestines spilling out, heads blown apart, you name it. Deadpool would be pleased.

Maybe it would have worked better with a rocking Junkie XL Score, a la Mad Max: Fury Road. Maybe the script and characters just needed more substance. Maybe it should have been a half-baked video game instead of a movie. Whatever the case, Hardcore Henry proves that, at this moment in film history, a First Person Movie doesn’t work. 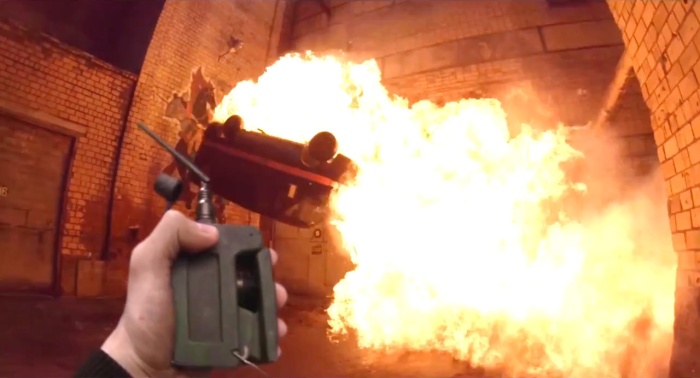 Unless Hardcore Henry is a smash hit, it will not create any imitators as this “First Person Movie” idea clearly only works in small doses.

2 thoughts on “HARDCORE HENRY Review: Mankind Is Not Ready For A “First Person Movie””