After being pulled from December back to July 31st to avoid clashing against ‘Star Wars: The Force Awakens,’ ‘Mission: Impossible 5’ has been without a title, poster, trailer, and plot synopsis for far too long. (Ethan Hunts saves the world… but how and from whom?)

Now we have all four. 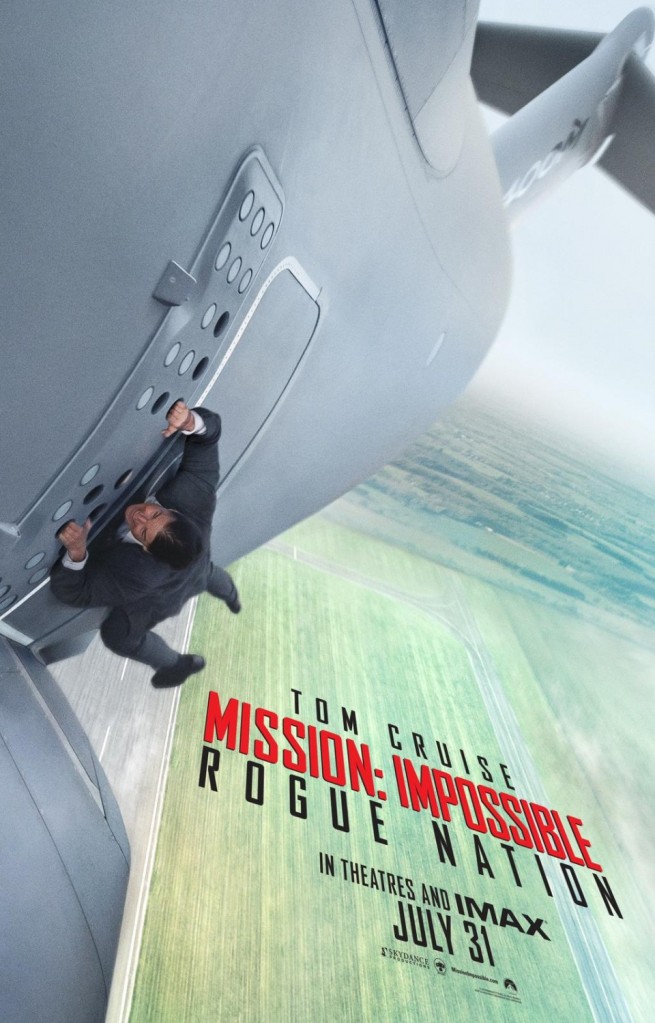 Like the poster for ‘Ghost Protocol,’ ‘Rogue Nation’s poster highlights the “Impossible” stunt from the film; this time Tom Cruise hangs onto an airplane as it takes off and continues to hang at 6,000 feet (or whatever)!

This minute long teaser trailer certainly excites as I have always been a ‘Mission: Impossible’ fan (M:I:2 doesn’t exist). We got motorcycle action! Benji (Simon Pegg) in the field! Quick shots of Agent Brandt (Jeremy Renner) and Luthor (Ving Rhames), back from earlier installments! More action! Alec Baldwin as the CIA director hunting down… well… Ethan Hunt (with the amount of times Tom Cruise is on the run in these films, that last name has got to be a pun… at this point).  The enemy revealed: the Rogue Nation Syndicate – “an anti-IMF. And “Impossible” stunts!

Watch the trailer now and get the synopsis after!

After watching the trailer for ‘Mission: Impossible – Rogue Nation,’ the official synopsis from Paramount is quite plain and simple:

Ethan and team take on their most impossible mission yet, eradicating the Syndicate – an International rogue organization as highly skilled as they are, committed to destroying the IMF.

Of course, this meaty one-minute trailer is just a teaser for the real trailer dropping TOMORROW! The 23rd!

So now that we have a title, poster, teaser trailer, and synopsis for ‘Rogue Nation!’ And we will be getting yet another, this time full-length, trailer for Ethan Hunt’s latest adventure… in this, 2015, the year of the spy genre.