Robert Downey Jr. has been hinting for a while now that Marvel Studios has big plans involving his trademark character Tony Stark; he who kick-started the entire Marvel Cinematic Universe (MCU) in 2008’s ‘Iron Man.’

Speculation about ‘Iron Man 4’ has been thrown around for weeks, with RDJ accidentally(?) sending the impression that he would do a fourth film in the franchise that saved his career, even though he has been denying interest in said project for several years now. 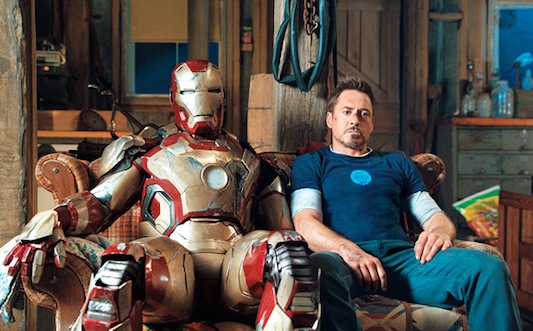 Instead, the other day RDJ confirmed at least part of Marvel’s master plan for the ‘Avengers: Phase 3’ solo films, announcing he is in negotiations for a rather large role in ‘Captain America 3,’ set to be released May 6th, 2016.

‘Captain America: Winter Soldier’ rocketed the good Capt. to the 2nd highest grossing Avenger, behind Iron-Man. (Of course, ‘Guardians of the Galaxy’ topped ‘Winter Soldier’ for biggest film of the year thus far, but they won’t get to play with the Avengers for a while now).

You can already see the impact left by ‘Winter Soldier’ in the marketing material for ‘Age of Ultron.’ Entertainment Weekly’s cover featured Tony Stark / Iron-Man (RDJ) and Steve Rogers / Captain America (Chris Evans). Besides Ultron, they are the only characters on the cover. They represent the Avengers.

If you look at the original ‘Avengers’ poster, Capt. is featured way less prominently than Thor. That was a different era, when ‘Thor’ was bigger than ‘Captain America: The First Avenger.’ Now Capt. grosses more so he has become the 2nd poster child for the MCU behind Mr. Mickey Mouse himself, Tony Stark.

But I digress; the point of the preceding reading material is that Captain America and Iron Man are the hottest shit this side of Marvel’s Galaxy (as long as Peter ‘Star-Lord’ Quill and crew stay on their own turf). Mavel wants to take the success of ‘Winter Soldier’ and double it!

‘Batman V. Superman: Dawn of Justice’ was also scheduled for May 6th, 2016, but choose not to tangle with Captain America, hot off ‘Winter Soldier.’

Good thing Warner Bros. already made the move, as they would now be shitting themselves if Batman and Superman were up against Captain America AND Iron Man. That’s Marvel’s absolute A-game, without involving the entire Avengers team.

Enough of a forward already; here is what RDJ joining ‘Captain America 3’ means for the film and the larger MCU. 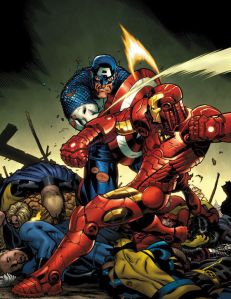 Who are the two biggest players in the comic version of ‘Civil War?’ Why, Captain America and Iron Man of course!

Captain America, on the other hand, leads the Marvel heroes who oppose the measure. What’s a superhero without privacy? Without secrecy? (In the comics Spider-Man reveals he is Peter Parker… and it ruins his life causing him to change sides. As long as Sony has the rights to the wall-crawler, we won’t be seeing that happen in any form of a ‘Civil War’ movie.)

Such a plot-line would be especially relevant for the big screen versions of Tony Stark and Steve Rogers, coming off ‘Winter Soldier’ and ‘Age of Ultron.’

Captain America spent the third act of ‘Winter Soldier’ dismantling S.H.I.E.L.D., which turned out to be a front for his old arch-nemesis organization, Hydra. After having to destroy three hellicarriers running on Zola’s algorithm, with the help of his friends, Capt. isn’t very trusting of the government. Though he was an agent of S.H.I.E.L.D. at the start of the film, Rogers never trusted the organization for its ‘NSA’ tactics and secrecy.

Captain America is not a government stooge. Rather, he stands for the ideals of this nation, ideals that still lead to government trust issues in its role in securing our nation. It makes sense, especially after the revelation that even S.H.I.E.L.D. – an organization set up by his old ex, an organization that brought together the Earth’s mightiest heroes – could be corrupted would not leave Capt. feeling warm and gooey about supporting the government in its superhuman registration act.

And Stark? Well, there may be an event that kicks off ‘Capt. 3’ involving a superhuman being reckless with his/her powers, killing innocents. Or maybe he has remorse for creating Ultron in the second ‘Avengers’ film. Or maybe it’s the big picture; the deaths brought about as a result of his actions in the ‘Iron-Man’ trilogy or his friends’ actions in ‘The Avengers.’ After all, he is responsible for kicking-off the whole superhero-thing.

Finally, let’s address the World Security Counsel. After Captain America took down their three hellicarriers which represented their post-‘Attack on NY’ security plan, the council will be scrambling to get a new security web in place. What’s safer than registering all superhumans so you are aware of all the threats you possibly face? (A move that would make Zola’s “Project Insight’ algorithmic proud.)

This ‘Civil War’ igniting plot-line is hinted at in the scene towards the end of ‘Winter Soldier’ where Natasha Romanov explains herself and Rogers to the security counsel. In this scene and the at the end of ‘The Avengers,’ a lack of trust is established in Fury’s super-team, even the suggestion that the Avengers may attract more trouble then they prevent.

And won’t the security counsel be even more freaked when a robot created by Tony Stark tries to eliminate human existence? Right? They’d be freaked out, right?

After ‘Age of Ultron’ their greatest fears will be realized with proof that the Avengers do cause more death and destruction than they prevent.

Will ‘Civil War’ Be Contained in ‘Captain America 3?’ 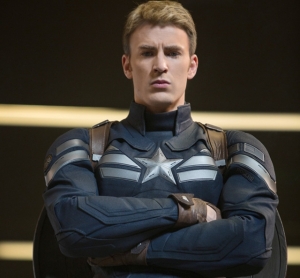 Can ‘Civil War’ be contained to one film? Or will ‘Captain America 3’ kick-off a ‘Civil War’ storyline that drives ‘Phase 3,’ ending either before or in ‘Avengers 3?’

Though it may be difficult to contain, I’d rather ‘Civil War’ be kept to ‘Capt. 3.’

Though ‘Winter Soldier’ has huge implications for the future of the MCU and features many supporting characters from S.H.I.E.L.D. like Nick Fury and Black Widow, it also works great as a stand-alone film. It offers a complete storyline for Steve Rogers involving Bucky Barnes, as well as a definite end for the current iteration of S.H.I.E.L.D.

On the other hand, ‘Thor’ and ‘Iron Man 2’ are examples of MCU films that don’t feel like a self-contained stroys, rather, excuses to introduce more knowledge of S.H.I.E.L.D. and the larger universe. Basically, both films were hurt by their focus on setting up ‘The Avengers.’

‘Captain America 3’ needs to be a complete film on its own; whether it self contains ‘Civil War’ or kick-starts it in a way that makes the film still like a stand-alone film; like the finale of ‘Winter Soldier.’

Similar but not the same as the preceding question; how far will ‘Civil War’ reach?

My guess is, at best, ‘Civil War’ will last two movies. If ‘Captain America 3’ is unable to contain the storyline, why not release a follow-up film simply called ‘Civil War?’ Set up the idea and alienate allies Tony Stark and Steve Rogers in ‘Captain America: Fallen Son’ then finish it off in ‘Civil War!’ Just an idea, studio execs. 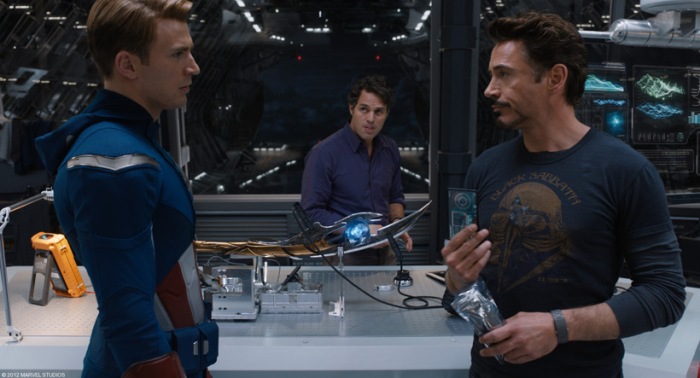 After all, I still assume ‘Avengers 3′ will involve the Guardians of the Galaxy and Thanos. (It would be a huge disappointment and misstep to never pay off Thanos’ grin from the mid-credit sequence in ‘Avengers.’ Paying him off with simply the Guardians would be a slap in the face.) ‘Civil War’ should be over by then.

Likewise, ‘Thor 3’ can’t focus on events like ‘Civil War’ when Thor has bigger issues to deal with, like his villainous brother Loki controlling the throne of Asgrad.

And unless Marvel wants to abandon it’s model and go DC, Dr. Strange and other new characters would likely stay in their own adventures, until they possibly unite in an Avengers film.

Meanwhile, ‘The Guardians of the Galaxy’ couldn’t give a shit about Earth registering superhumans; they’re rocking out to ‘Awesome Mix: Vol 2’ on the opposite side of the Galaxy.

We’ll continue to follow any and all Marvel Studios announcements as they happen. As you can obviously see, a lot of questions remain to be answered. And Marvel Studios still has a lot in store for us geeks. What will they announce next?

6 thoughts on “Robert Downey Jr. Will Be In CAPTAIN AMERICA 3! What It Means for the Flick and the MCU”