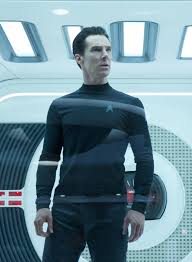 I may be an obsessive geek (I am), but whenever I am down, lately (since it’s Bluray release) I watch my favorite scene from STAR TREK: INTO DARKNESS. The characters stir up emotions I could only hope to feel.

The best scene of the summer (or year?) is the conversation between Captain Kirk and Khan in INTO DARKNESS.

I’ve watched it countless times this fall, whether drunk… or sober… really, whenever I need an escape.

Kirk: “Why is there a man in that torpedo?”

Khan: “There are men and women in all those torpedoes, Captain… I put them there.”

Khan: “A remnant of a time long past. Genetically engineered to be superior so as to lead others to peace in a world at war. We were condemned as criminals, forced into exile. For centuries we slept, hoping when we awoke… things would be different. But, as a result of the destruction of Vulcan your Starfleet began to aggressively search distant quadrants of space. My ship was found adrift, I alone was revived.”

Kirk: “I looked up John Harrison. Until a year ago he did not exist.”

Khan:” John Harrison was a fiction created by the moment I was awakened by your Admiral Marcus helped to advance his cause. A smokescreen to conceal my true identity. My name is…. Kahn!”

Kirk: “Why would a Starfleet Admiral ask a three-hundred year old frozen man for help?”

Khan: “Because I am better.”

Khan: “Everything. Alexander Marcus needed to respond to an uncivilized threat in an civilized time. For that, he needed a warriors mind. My mind! To design weapons and warships.”

Spock: “You are suggesting the Admiral violated every regulation he vowed to uphold, simply because he wanted to exploit your intellect.

Khan: “To exploit my savagery. Intellect alone is useless in a fight, Mr. Spock.You, you can’t even break a rule, how would you be expected to break bone? Marcus used me to design weapons. To help him realize his vision of a militarized Starfleet. He sent you to use those weapons. To fire my torpedos on an unsuspecting planet. And then, he purposely crippled your ship in enemy space leading to one inevitable outcome. The Klingons would come searching for whomever was responsible and you would have no chance at escape. Marcus, would finally have the war he talked about. The war he always wanted.”

Kirk: “No, no. I watched you open fire in a room full of unarmed Starfleet officers. You killed them in cold blood!”

Khan: “Marcus took my crew from me!”

Kirk: “You are a murderer!”

Khan: “Used my friend to control me. I tried to smuggle them to safety by concealing them in the very weapons I had designed. But I was discovered… I had no choice but to escape alone. And when I did, I had every reason to suspect that Marcus had killed everyone single one of the people I hold most dear… So I responded in kind… My crew, is my family, Kirk. Is there anything you would not do for your family?”

Powerful words, better experienced by watching the scene from STAR TREK INTO DARKNESS yourself. I love this scene because it is the only scene, in my opinion, that Khan speaks the truth. After all, he is looking out at distant space as he delivers it; not looking at Kirk or Spock when he sheds his tear.

Of course, being Khan, he plays everyone, but this scene rings true; we understand the real suffering of the antagonist, humanizing him, just a bit.

Before he goes full out wacko and says “You should have let me sleep!”

2 thoughts on “STAR TREK INTO DARKNESS – My Quantom Of Solace”