Captain America is my favorite Avenger. He has the most interesting origin story… a man out of time constantly fighting Hydra, I enjoy watching him in combat with his shield on the ground as opposed to watching Iron Man or Thor fly about, and he’s just damn likeable as played by former Human Torch, Chris Evans.

In THE AVENGERS INITIATIVE: PHASE TWO (starting with IRON MAN 3 and ending after GUARDIANS OF THE GALAXY with AVENGERS: AGE OF ULTRON in summer 2015), Marvel Studios has really found the heart and soul of each of their A-List Avengers in their individual pictures. 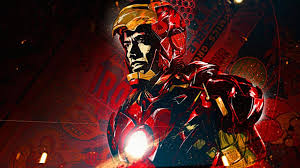 IRON MAN 3 wrapped up that franchise with an explosive (pun very much intended) finale fit for the boisterous Tony Stark. Even the credits exploded with a 3D 1970s style befit the franchise with a great, punchy score by Brian Tyler.

THOR: THE DARK WORLD sent us on LORD OF THE RINGS style epic fights amongst sword carrying soldiers in outer space, with lots of myth and everyone’s favorite Marvel villain, Loki. Brian Tyler again did the score, this time befitting the magnitude and epicness of the God of Thunder alongside great comic-esque paintings of the characters.

Now that the origin films are gone and there is little to set up for the AVENGERS: AGE OF ULTRON, each hero is free to play in his own universe, with less (even after credits) sequences that set up AVENGERS 2. Rather, these days the post-credit sequences set up the next film within the THOR or CAPTAIN AMERICA franchises… not that WINTER SOLDIER doesn’t tease AGE OF ULTRON characters… 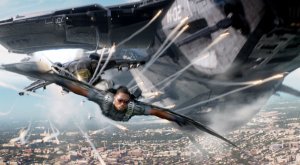 As each sub-franchise takes on more of a unique feel, all under the Marvel Studios banner of combining light heartiness and jokes to the films to avoid Marvel becoming DC’s DARK KNIGHT or MAN OF STEEL franchises, the good Captain moves out of WWII and into a modern day espionage thriller… with just a few super soldiers, crazy living computers, and a winged soldier.

If Iron Man is the most classic superhero formula, and Thor is more a space saga (as I assume GUARDIANS OF THE GALAXY will be… only more lighthearted and joke filled than any other MCU film yet), then Captain America is the aforementioned thriller. END_OF_DOCUMENT_TOKEN_TO_BE_REPLACED 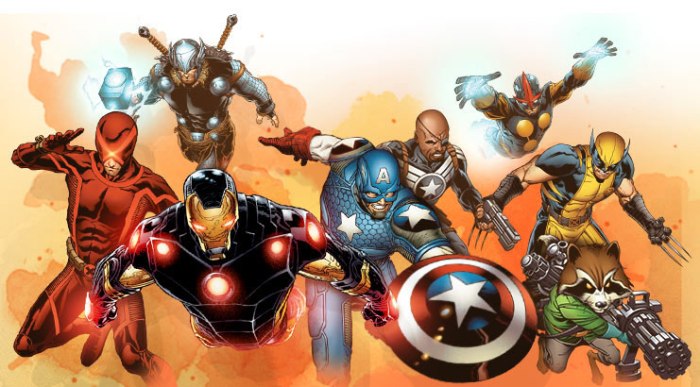 I don’t mean to step on Media Monster’s toes (he does Weekly Comic Picks… nearly weekly), but I am really into Marvel NOW! right… er… now.

So, I’ve decided to write a (perhaps) weekly column on all the Marvel NOW! comics I read each week because…

a) A second opinion never hurts.

b) I subscribe to a great deal of the Marvel NOW! titles, with some exceptions including X-MEN titles and FANTASTIC FOUR.

c) Did I mention I’m really into Marvel NOW!?

d) I’m not caught up on my IDW, DC, and non-Marvel NOW! Marvel titles.

While Media Monster simply picks his favorite titles each month, I’ll give you a run down of what happens each issue, following it up with a mini-review of my own. Like with my previous Marvel NOW! post, I will only be discussing titles that got rebooted along with Marvel NOW! Anything started prior to that, like AVENGING SPIDER-MAN, HAWKEYE, or AVENGERS ASSEMBLE, or any books in the Ultimate Universe like SPIDER-MAN starring Miles Morales, will not be discussed. 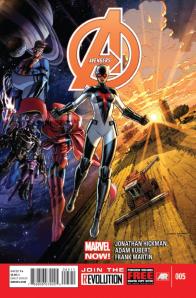 Previously: AVENGERS is really confusing right NOW! (See what I did there?)

Following the first three-issue arc involving a creative/destructive force on Mars, Issue #4 focused a little on the aftermath; both villains and heroes racing to either quarantine or benefit from sectors of Earth hit with the evolution spawning virus from Mars. Hyperion was introduced, yet this week’s issue seems to relate little to the four that came before.

Synopsis: Like Issue #4, this issue focuses on the origin of a hero. Izzy finds a pair of glasses in a corn field in Iowa. Putting them on, she becomes a Smasher, the first human Subguardian in the history of the planet Chandilar. The story jumps around from Izzy’s first journey to Chandilar to the present where she has rallied the Avengers to help defend the planet.

Of course, the Avengers are successful and the planet is saved. Afterward, we learn (via flashback) that after she received her gift, Izzy was given an Avengers card by her grandfather who served with Captain America in his youth. Izzy is promoted to Superguardian, again, the first Earthling to ever achieve this rank. Meanwhile, the other Superguardians have come to a startling conclusion; the force they fought back was not attacking their planet, rather it was fleeing something far more terrifying and powerful.

Judgement: While AVENGERS issues 1-3 were fairly straightforward in their storytelling, issues 4 & 5 seem unnecessarily complex, almost like the writer is simply trying to imitate unconventional storytellers like Christopher Nolan or Quentin Tarantino. I don’t like how the previous storyline was all but dropped for the issue, with the exception of a nearly pointless page on which Tony Stark interacts with Blackveil, the next evolution of man whom was a result of the incident on Mars.

AVENGERS seems to be building up to something much bigger, setting up characters like Hyperion and Superguardian Smasher Izzy, but until the fruits of Marvel NOW!’s labor are evident, I label this book my least favorite out of the titles I currently read from Marvel NOW! 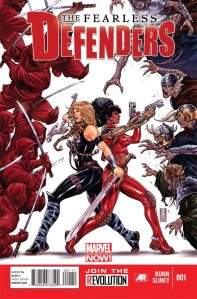 The action starts with Misty Knight rescuing relics that belong in a museum, Indiana Jones style (her employer Dr. Annabelle Riggs “grew up watching a lot of Indiana Jones”) from a heavily guarded ship. She’s not the only one after ancient treasures, as the ship is destroyed by an attack helicopter, but not before she escapes with a miniature statue. The helicopter baddies are able to salvage an ancient skeleton, one which will somehow bring about a massacre. 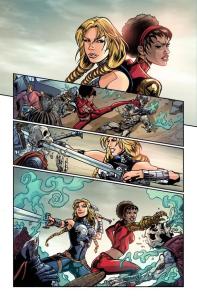 Back at the White Mountain National Forest, Annabelle Riggs (she watches Indiana Jones and shares a last name with my favorite buddy cop, I may be in love…) examines the statue at an Asgardian burial site, accidentally activating a song that awakens all the dead vikings. Misty Knight does her best to fight off the hoard but is only successful once Valkyrie arrives to help. Following their battle, Valkyrie leaves to consult the all-mother, with Misty Knight and Riggs tagging along.

Judgement: I’ve never heard of any of these characters, but so far I dig the book. Valkyrie is basically a female version of Thor; officially a Shieldmaiden, “gatherer of fallen warriors.” Misty Knight is a ninja with a bionic arm called Satan Claw, a “Stark Industries Cybernetic Replica.” And Dr. Annabelle Riggs is a lesbian, making out with Valkyrie after she is saved… so maybe she is not the girl for me after all. 😦 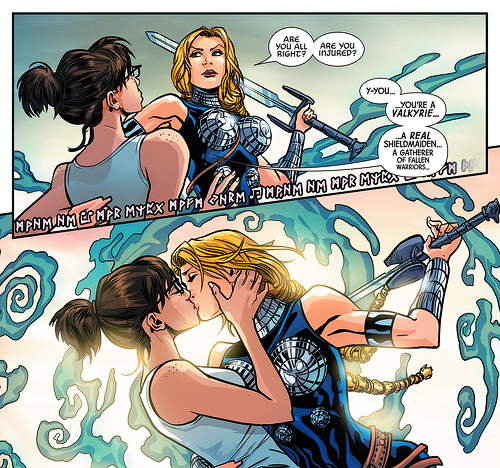 The action is solid, the characters interesting, and a threat looms large as the corpse secured by the villains is causing the Doommaidens to rise, which Valkyrie admits is her fault.

We’ll see where the book goes in coming months, who else joins the team, but for now my curiosity is peaked, even if I’m not one with a history for “girl power.” 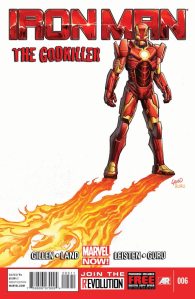 Previously: Iron Man retrieved all five missing Extremis kits, creating new foes along the way. Seeing what types of enhancements the kits resulted in, Tony Stark decided to push himself farther, designing a suit for deep space travel. So Stark set out on his intergalactic adventure, all set with a new A.I. called P.E.P.P.E.R., with all the personality traits of Stark Industries CEO Pepper Potts.

Synopsis: After defending the Voldi Tear in deep space from a “predatory mechanoid pirate fleet” Tony flirts with a purple-skinned alien at the Voldi Citadel of Rapture. The two decide to retreat to her room, as it is Tony’s birthday, after all. Upon removing his armor,  miss Purple-Skin vomits; facial hair is apparently a disgusting taboo in this sector.

Booted out before he even has a chance to shave, Stark is quickly arrested by the authorities for Deicide. Labeled the Godkiller, Stark is being held for killing the Void Falcon… or as we know it on Earth… The Phoenix (Iron Man had to slay the nearly unstoppable force to save the Earth in AVENGERS VS. X-MEN).

Judgement: Not a lot happens this issue. Considering this is part one of a three issue arc, I expected more to happen to Stark than a three page space fight (two of which were a splash page), some flirting, and then arrest. In fact, this issue was mostly flirting. 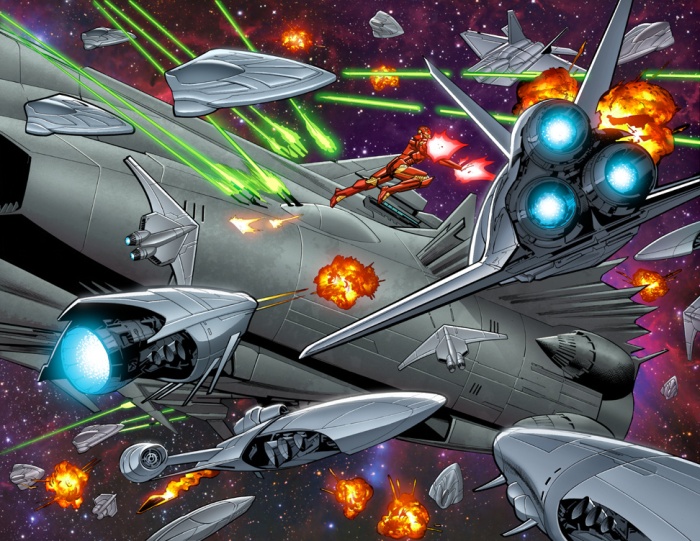 While it’s the 3rd worst title of the week (which also makes it the 4th best, I guess…), I still like the direction IRON MAN has taken with Marvel NOW! While still bogged down in AvX aftermath, it is interesting to see the great threat that was the Phoenix from an alien perspective. And there are some real fun moments including Tony’s STAR TREK reference where he exclaims that “the purple space girl thing has its appeal too.”