You know you’ve had a great holiday, when said day reminds you how horrifically underrated WORLD’S END and LONE RANGER are. 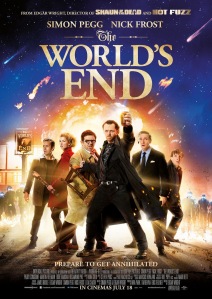 Yes, I spent time with family, which was sweeter than my mother’s fudge, but I also got stuff. And yes, I received WORLD’S END and LONE RANGER B-Rays for my holidays.

I must rant a bit…

First, though WORLD’S END feels most like a mash up of SHAUN OF THE DEAD and HOT FUZZ – the baddies are basically zombies in part of a conspiracy – it IS a master’s course for everything Edgar Wright has done previously.

WORLD’S END captures the best elements of SPACED, SHAUN, FUZZ, and even SCOTT PILGRIM VS. THE WORLD, becoming Edgar Wright’s most perfect package yet. He has mastered the craft of visual storytelling.

Wright and Simon Pegg’s writing has matured, matching an incredible, more personal story about a man who won’t grow up because he won’t let go of the past, mashed up with good old science fiction mayhem.

It even plays a lot like ARRESTED DEVELOPMENT with story bits planted from the first monologue coming to fruition half the film later. It’s just packed with visual and self inclusive jokes. Even with the amazing amount of comedy packed into the film, not a scene doesn’t serve the overall, more personal/mature/realistic story.

And forget about the soundtrack, easily the best songs chosen for any Edgar Wright film than ever before. I loves me the songs on his film’s soundtracks.

THE CORNETTO TRILOGY is most certainly one of my favorite trilogies.

LONE RANGER also doesn’t get enough credit for the script; melding imagery of werewolves and silver with western lore and the spiritual. All with the nonstop pace and action one expects from a summer blockbuster. Like WORLD’S END, the themes transcend the typical summer blockbuster, benefiting from multiple viewings.

The clever screenplay also complements by the wonderful shots of the American West, a character just as much as the spirit horse, named Silver.

And the action, oh, the action. Sooooo good. Matches the tone of the first PIRATES OF THE CARIBBEAN with something out of INDIANA JONES. Fun and fantastical.